Each Muslim is responsible to perform one particular virtuous task, namely to perform dakwah, or to propagate, spread and preach the message of Islam to others. The word dakwah originates from the Arabic word which means to summon, to request, to call or to invite. In general terms, dakwah is the call or invitation meant for the non-Muslims. While dakwah among the Muslims are the efforts to rejuvenate faith and to return individuals or the Muslim society towards observing the true teachings of Islam….

Each Muslim is responsible to perform one particular virtuous task, namely to perform dakwah, or to propagate, spread and preach the message of Islam to others. The word dakwah originates from the Arabic word which means to summon, to request, to call or to invite. In general terms, dakwah is the call or invitation meant for the non-Muslims. While dakwah among the Muslims are the efforts to rejuvenate faith and to return individuals or the Muslim society towards observing the true teachings of Islam.

Based on the above, dakwah is a call towards the teachings of Islam, or the invitation to all mankind, based on certain methods or ways, towards the message of Allah and His Prophet in order to gain His blessings in this world and in the Hereafter. In respect of the concept and foundation of dakwah, Ibn Kathir in his tafsir stated that performing dakwah is a responsibility of each individual Muslim, and does not mean that when certain individuals are already performing dakwah activities, others would escape such responsibility. This is very fitting with the message of Allah in surah Ali Imran verse 104:

Which means: “Let there arise out of you a band of people inviting to all that is good, enjoining what is right, and forbidding what is wrong: They are the ones to attain felicity.” [Al-Quran, Surah Ali Imran, verse 104].

Many were of the mistaken impression that the responsibility of performing dakwah falls upon the shoulders of the scholars, the ustaz or ustazah only. When a certain transgression occurs, many do not want to be involved. Among the excuse they give is that they do not want to be involved in other people’s business, sins and rewards, that our graves are our own problem, that they do not have not enough knowledge, and many others.

The fact is, such a holy task is actually the responsibility of each Muslim who professes belief in Allah and the Hereafter. Each Muslim has his, or her, own unique roles to play in the efforts, according to their respective abilities and responsibilities.

In a hadith narrated by Imam Muslim, Abu Said Al Khudri reported that Rasulullah had said:

The hadith is meant for every Muslim. This means that each Muslim is asked to perform the responsibility, and it is a basic task for all to perform the dakwah, based on the ability and capacity that we each have.

The greatness and the prominence of Muslims in the days of old, to the point that they were recognized as the khaira-ummah, or the best of peoples at that time, was due to their success in handling their dakwah responsibilities well. They strived hard to invite all mankind towards the path of Allah, inviting others to do good deeds and to forbid the performance of evil

Based on such concept of dakwah, it would mean many Muslim individuals would be involved in propagation activities. It would be better and would fulfill the dakwah mission as outlined in the Sunnah of Rasulullah. The Al-Quran as the main source of reference has given us the best way to ensure the success of propagation activities among family members and society. But, those who perform it should be the exemplar for the society.

Therefore, the performance of dakwah must be begun through our own self, and the invitation to perform good virtuous deeds and to refrain from committing sin and evil. Thereafter, extend it to our wife, children, other family members and widen it to the society.

When all that has been fulfilled, the confidence of the society towards the content of our propagation message shall be stronger, because the one who performs the dakwah is practicing what he is preaching, in terms of principles and morals, through his life. Therefore, those who perform the dakwah will be inviting them towards the truth and shall bring benefit to all within the society.

Indeed, Rasulullah is the best exemplar for us to follow, in our quest to propagate Islam to all mankind. Prophet Muhammad was not a theorist or someone who only knows how to order around. He always performed each and everything he said, and so it is not a wonder that he was able to soften many hearts to receive the message of Islam.

The Prophet performed his dakwah to all levels of the society. His focus of dakwah stretches from the lowest strata of the society, such as the slaves, to the very top, such as leaders of nations, and included the first Jews who accepted and believed in the Book of Allah, and also those who worshipped idols. Those are some of the examples of people handled by Rasulullah.

Propagators must understand and know their targets’ respective needs and problems, especially those involving non-Muslims. Planning and strategizing the method to be employed must be emphasized in order to gain satisfactory and precise results as desired by the targets. This is because many among the non-Muslims resist and do not view Islam as the best religion or way of life. This stems from the failure of Muslims today to showcase the true Islamic way of life. Opinions that say Islam is a terrorist religion – because Muslims like to fight, is a barbaric religion, is a religion that treats believers of other faiths cruelly, and is a religion with too many rules, must be corrected.

How many among us use the proper method to propagate Islam to others? Or, have we never told them the positive side of Islam? Ponder upon that, shall we?

Which means: “Invite (all) to the Way of your Lord with wisdom and beautiful preaching; and argue with them in ways that are best and most gracious: for your Lord knows best, who have strayed from His Path, and who receive guidance.” [Al-Quran, Surah An-nahl, verse 125].

In that verse, Allah explained the three principles of dakwah, namely:

First: The benefit of wisdom.
Carefully chosen words are the bridge to a person’s heart and the catalyst towards enlightenment. Give explanations that are true and correct based on proofs and verses from the Al Quran and the Sunnah which clarifies the truth and destroys confusion, in line with their psychology which we should get to know of and understand, as they are our target audience. 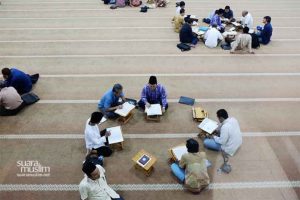 Provide good advice and anecdotes that illustrate good examples to attract their interest. Expose the merits and the virtues of Islam with the aim of getting them closer, and not to alienate them. Make it simpler, not difficult.

Third: Discuss and hold dialogues in the best possible manner.
Discuss in a harmonious and cordial setting, field strong points, provide incisive rebuttals and proofs that are convincing, and control our emotions well in disseminating the truth. The aim is to destroy confusion and to explain the truth.

Which means: “It is part of the Mercy of Allah that you do deal gently with them, were you severe or harsh-hearted, they would have broken away from about you: so pass over (their faults), and ask for (Allah)’s forgiveness for them; and consult them in affairs (of moment). Then, when you have taken a decision put your trust in Allah. For Allah loves those who put their trust (in Him).” [Al-Quran, Surah Ali-‘Imran, verse 159].